That their country is no longer theirs

That their freedoms have been stripped away

One camera, one cellphone, one megabyte at a time

Now is the time to pull back the curtain

Welcome to your trial ladies and gentlemen

Welcome to the trial of the United States government

Court is now in session

I don’t watch a lot of television these days, but two shows I have always kept up with are ‘Homeland’ and ‘Person of Interest’, because of their relevance to the times in which we live. I will have to do a quick summary of both shows for those who may not be following, in order to make my point. Stick with me.

Homeland is about a US Marine by the name of Brody, who switched sides while in captivity. The event that led to his ‘radicalisation’, was the killing of his host’s son in a drone strike in Iraq. Brody had developed a bond with the son of Abu Nazir (the man with whom he was staying), and Nazir used his son’s death to first, convince Brody to wear a suicide vest, which didn’t go off, and eventually to kill the Vice President, who authorised the drone strike and eventually its cover up. Up to that point, Homeland was essentially a critique of drone warfare, which eventually became slightly overshadowed by a love affair between Brody and Carrie Matheson, two of the show’s main characters.

Moving on swiftly to Person of Interest, the main theme of which is the good and mostly bad sides of a surveillance state. The American people are watched over by a surveillance programme called ‘Northern Lights’ created by Harold Finch. This machine churns out Social Security numbers of people linked to all kinds of violent activities, including, but not limited to, acts of terrorism. Finch takes it upon himself to help people in mortal danger, with the assistance of a couple of others. The dialogue has a particular brand of humour which I quite like.

This takes me to the opening lines of this post, said by Leslie Odom Jr’s character, Peter Collier, in the final 45 seconds of Episode 22, Season 3, of Person of Interest. A few episodes earlier, Collier’s group ‘Vigilance’, no doubt with a nod to that famous quote widely attributed, incorrectly as it turns out, to Thomas Jefferson, exposed the existence of Northern Lights to the world. Those revelations led to a cancellation of the Northern Lights programme, opening the way for a privately owned surveillance system called Samaritan, to be put at the service of the US government. The pitch for Samaritan was being made to a top presidential adviser when Collier and his group took them hostage,with the aim of putting them on trial and broadcasting it on the internet.

In that same episode, Collier’s motivation was also revealed. He had an elder brother who was a recovering alcoholic, and had been sober for nearly two years. While at dinner with him one evening in 2010, his brother was arrested on grounds of ‘national security’ and detained for weeks. After his release, he lost his job and took his life. Collier went looking for answers, and was presented with four photographs showing his brother talking to an Arab man, whose cousin was linked to terrorist activity. That Arab man showed up at the funeral, and  told Collier that his brother helped him on his own journey of sobriety. It turned out that there was no reason whatsoever to detain him. Filled with a desire for revenge, Collier joined Vigilance and resolved to expose the government that took his brother from him.

That is that for the background. The common thread running through both shows is a government that suffers serious consequences as a result of hurting one too many people, and not providing any means to seek redress. In a word: Impunity. It is that impunity that was foremost in Edward Snowden’s mind when he released information exposing the extent of America’s surveillance apparatus. It is that arc of impunity that every government and corproration, left to its own devices, ultimately bends toward.

In another example, the drone programme which has gone into overdrive during the Obama administration, could be creating as many enemies for the US as it eliminates. There is yet to be adequate transparency and reform in the ways targets are chosen, disclosure about innocent people who are killed, and most importantly, accountability for those deaths. While both shows contain messages about the need for thorough reform in the US drone and surveillance programmes, other countries, like Nigeria, also have lessons to learn.

Extra judicial killings and unlawful detentions in Nigeria are a way of life. These crimes are committed by the Army, Police and other security agencies, and the victims of these crimes have no recourse. For example, no one was ever brought to justice for the killing of the Ogoni Nine in 1995, just as no one ever went to jail for authorising a reprisal attack in Odi, Bayelsa state, in 1999. To what extent did these and other events lead to the violent militancy and costly amnesty in the Niger Delta?

The current violent strain of Boko Haram can be traced to 2009, with the extra judicial killing of then leader, Mohammed Yusuf. To what extent did his killing, along with many others, by the police, lead to the situation we have today? In trying to fight the insurgency, several crimes have been committed by the Nigerian Army against innocent civilians. Many people have been unlawfully detained and killed, with no one answering for these crimes. Such events inevitably lead to sympathy for terrorists and obstruct moves to resolve the insurgency.

It is this same impunity which makes it possible for soldiers sent to the front lines to be treated in the worst way, paid pitiful amounts of money to put their lives on their line and are poorly equipped to boot. If they get injured or killed, they and their families are on their own a lot of the time. Yet, no one answers for it.

There are only so many wrongs a nation, a government, can commit before the chickens come home to roost. While the world rightly screams ‘Bring Back Our Girls!’ from the rooftops, it is merely a manifestation of several atrocities over many years. I for one would like a trial of the Nigerian government. It would be prime time stuff. 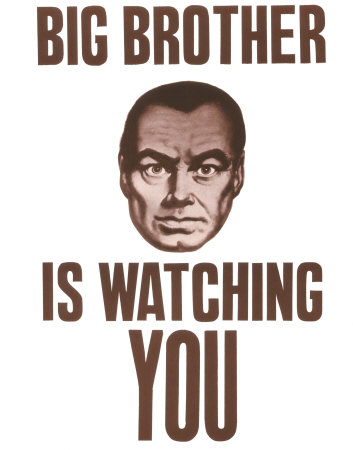 A number of you who have clicked the link to this post probably follow Big Brother Africa to varying degrees, or have watched one of the several spin offs which have aired in several countries since the franchise first started in the Netherlands in 1999. It has been a huge success precisely because it exposes lots of us as voyeurs, glued to our TV screens, watching the every move of total strangers.

As the world becomes more and more connected, we see more and more portrayals in movies of the dangers of governments allowed to violate the privacy of citizens. Films like Enemy of the State, Minority Report and even shows like Person of Interest (a favourite of mine) paint scenarios that once seemed a little far into the future, but no longer.

Some of you may have heard about a $40 million contract given to an Israeli firm by the Nigerian government, to monitor internet communication of Nigerians. The firm called Elbit systems was contracted to deploy its Wise Intelligence Technology, before Premium Times broke the story, leading to an investigation of a contract award that went against all the rules of due process and privacy.

After 9/11, Americans accepted serious incursions into their privacy by their government, via the PATRIOT Act, in order to keep their country safe, as they were told. But like most things this ‘handshake’ has ‘gone beyond the elbow’. On June 6th, Glenn Greenwald broke the story that the NSA was engaging in widespread and indiscriminate surveillance of US citizens by collecting phone call data from the biggest US phone networks. It gets worse. The NSA has apparently also been collecting user information from Apple, Google, Facebook among others since 2007, as part of a program called PRISM, even though the denials have continued.

For some it may not be a surprise, but the sheer scale of it in such a short time, is a cause for grave concern, especially because as Bruce Schneier notes: ’Once a security system is in place, it can be very hard to dislodge it’.

What this means is that for countries like the US, that is becoming a surveillance state, rolling back the laws that enable such behaviour will be an uphill battle. It also means that for those societies in which massive surveillance has not yet become the norm, now is the time to put in place laws that will protect citizens from their governments. As we move closer and closer to an internet of things, which will collect information on virtually everything you do, that information, and the access to it, is absolute power, and the abuse of that power is inevitable.

It is on that note that I want to highly recommend the work Paradigm Initiative Nigeria has done so far to bring attention to this issue. Download their excellent policy brief here (PDF) which gives a good overview of the issues and charts a way forward.

Now, this may all seem very serious, and it is. Right now, as you read this, the future of the internet is being shaped to favour governments and corporations, while we just browse away. We must organise and engage with this process as much as we can, or this future will be defined for us, in lots of ways that will be less than benign. The price of liberty is eternal vigilance.

'The aim of an argument or discussion should not be victory, but progress.' — Joseph Joubert